This morning the boys woke up around 7:15am. Once Ben and I got up and got them out of their bedroom I decided to go cold turkey on diapers for Zak today. I knew we didn't really have plans to leave the house since it was raining so I figured it was a good day to try and see what would happen. So at 7:30am Zak put on his big boy underwear. After breakfast Ben set up their new hockey goal in the kitchen since it was pouring outside. The boys had a blast playing with it. Zak really perfected his victory dance each time he made a goal. He was also a good coach to Ryder as well as a great cheerleader for Ryder. Ryder was pretty rough with the hockey stick and tended to use it more like a baseball bat or golf club, but as he practiced he got much better. 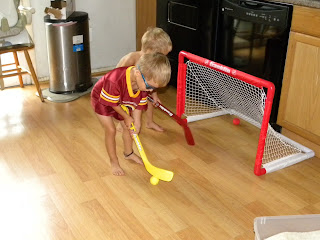 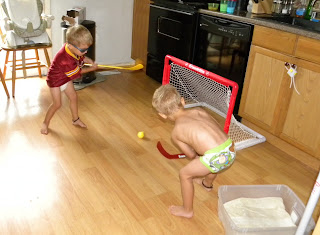 Throughout the morning we asked/reminded Zak about using the potty and he did pee on it a few times. There was one time that he said he needed to go potty so I took him in the bathroom and quickly discovered he had pooped in the underwear. So he put on a new pair and off he went. I made a trip to the grocery store by myself to buy all of our food for the week. Ben and I have been getting good about planning out our meals on Sundays, looking through the ads and coupons then making one trip to the store.
After I got home we started to go through all of our movies and re-organize them. I have a bad habit of taking a DVD out of the case, watching it, and then just putting it on a shelf some place without the case. A long time ago we had started putting our DVD's in a binder and get rid of the cases so we decided to go through and do this again. We then realized we would need another DVD binder so we decided to take a family trip to Target. Zak had been doing so good all day with only the one poop accident so we let him keep his underwear on for our trip. He did very good and had no accidents. My three guys got all dressed up in their Orioles clothing for our trip to Target... 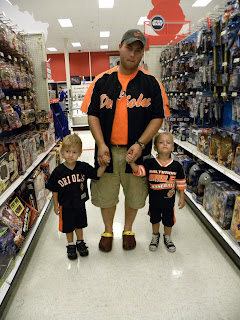 When we got home Ben went back to organizing the movies. He put all of the kid's movies in one binder and the adult movies in the other. Zak and Ryder were helpful with throwing away all of the cases. While going through the movies we discovered a few movies that we are going to keep our eyes open for on sale. This afternoon we all fell asleep and took a nap. Around 6pm I woke up because I heard Zak calling my name. He had peed in his underwear and was very upset about it. I realize it was really our fault and we should have put him in a Pull-Up for nap. We then had dinner which was Stuffed Peppers in the crock pot. After dinner the boys played for a bit and then it was shower time and bedtime.
I am so pleased with how well Zak did today without diapers. It went much better than I had prepared for. We did ask/remind him about every hour to use the potty, but you have to start some where. I am looking forward to the time when he starts telling us that he needs to go, but I know we will get there! Ryder did sit on the potty once or twice today when he saw Zak do it and he did pee once. It is definitely a work in progress.
Tomorrow I am taking the boys to their 3 year pediatrician check-up. I am excited to see how much they weigh and what their heights are. I do know Ryder will get two shots that the Immunologist has requested be done, but I am not sure if there are any other shots either of them will get.