I have not posted for about a week or so. I guess things have been a little busy or crazy around here. A little update about what we have been up to...
Ben got home from TN last Thursday and was off Friday along with the weekend so that was nice. He is going to be on-call the next few weeks in a row because there are only two of them in the shop and since he has been gone a lot recently (all work related) the other guy has been on-call for a few weeks in a row. He has one more vacation day left so he is using that as an extra day off before Christmas which means he will be off starting December 22 and go back the Monday after Christmas. Then he also has off December 30 & 31 as paid Holidays.
Last week I did take Zak to the pediatrician because we have some concerns with his appetite recently. He has started to eat SO much more food and it started out of the blue. One morning he woke up and for breakfast had 2 Pop-Tars, banana, apple, 4 granola bars, Nutri-Grain bar and cereal! And he was still complaining that his tummy hurt and he needed to eat. Along with the increase in his appetite came a huge increase in thirst as well. He drank over 100 oz of fluids in one day...the average for a 3 year old should be 50 oz in a day! This increased thirst brought increased urination which meant he was peeing through diapers, clothing and sheets multiple times a day. My first thought was Diabetes of course. The pediatrician did a urinalysis in the office which came back normal other than it being dilute from all of his increased fluid intake. The next morning we had blood work done to check metabolism, organs and CBC which all came back completely normal as well. At the moment, we are going with the idea that it is a growth spurt, but if it continues for another week or so we will head back to the pediatrician for more ideas. The last few days his hunger has remained the same, but we have been able to limit his fluids much more so they are closer to the normal which has slightly helped the excessive urination.
The last few nights Ryder has been coughing really bad, but during the day he seems fine. Yesterday I did get a call from his school saying he had really bad diarrhea and his cough was pretty bad. Today he once again seems perfectly fine.
I have been battling with headaches and a cold for the past few days, but nothing too bad. I am trying to get back into a good routine of working out at the gym about 5 days a week. I was doing good, but while Ben was away for 2 weeks it got a little chaotic and I was not able to maintain that routine.
Now for some pictures from the past week...
On Saturday Ryder & I went to a cat show in Parkville which was only abut 15-20 minutes from the house. I always try to get to local shows at least for a bit to see everyone and the cats. I took Ryder so we could have some one-on-one time while Ben & Zak had their time together at home. We were there for about 3 hours and Ryder did amazing!
Ryder playing with Cash 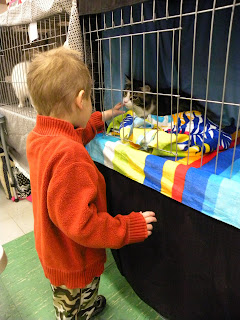 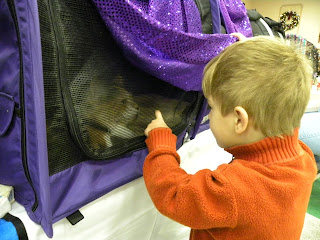 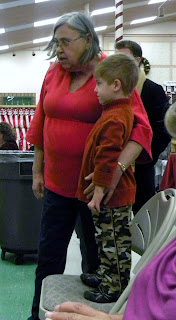 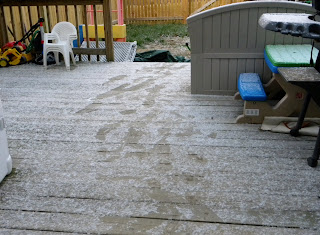 Every year in December we pull out our Advent calendars to help count down the days until Christmas. This year we received a new one from Saba & Peg which is really neat because it is the nativity scene. I figure this will be a great way to slowly teach the boys all about the true meaning of Christmas, as they get older they will have a much better understanding but this is a start. We have decided to use two of the calendars as incentives as well to eat good lunch and dinners. The boys also get excited to get to count the numbers each day so hopefully this will help increase the numbers they can count (at the moment they make it to 14 on their own).
After breakfast they get to put a piece on the scene 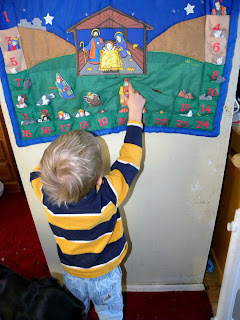 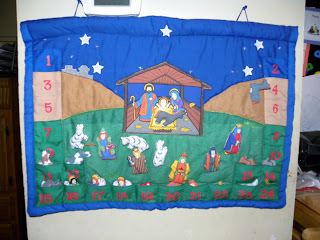 After lunch (if they eat well) they get to count,
move the mouse and get Pez each day
(this is the calendar I used as a kid) 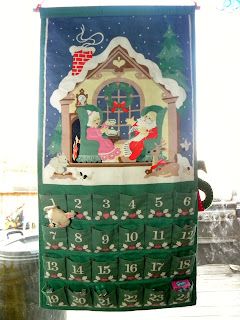 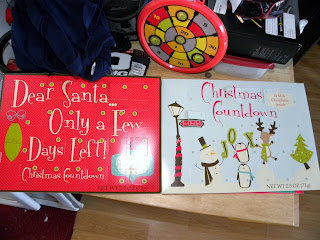 We have been having big issues with VZ and the ornaments on our tree. So far she has broken 5 ornaments which have all been Ben's! We have slowly moved the ornaments all up higher on the tree so she seems to leave them alone now. She does like to chew on the tree so we are constantly pushing her away...since she is deaf we can't just call out her name. She does have a new favorite place to nap though.... 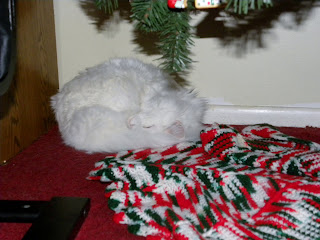 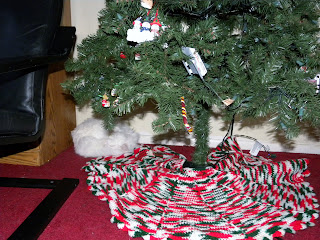 The other day I was able to find itty-bitty gloves which actually fit on the boys' hands! They look like doll gloves, but they work well. We have Toy Story gloves from my mom that match their hats, but their hands get lost in them which usually leads to them being taken off. 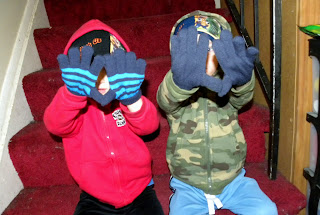 While at WalMart this morning the boys picked up these hats and put them on. They walked around the whole store wearing them so I ended up buying them. They have yet to take them off! 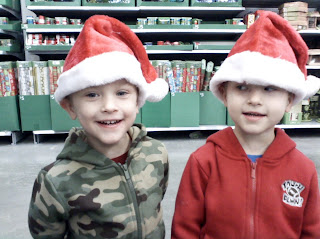 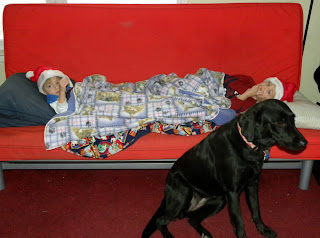