On Sunday we spent the day in Annapolis. Zak has been asking for some alone time with mommy & daddy without Ryder so we worked out a plan to make it happen. We dropped Ryder off with Colleen & Jamison then took Zak out for a bit. Of course, the whole time Zak was whining that he needed his Ry Ry and wanted to go get him. We had lunch at Fuddruckers which Zak enjoyed because he got to play a few games. 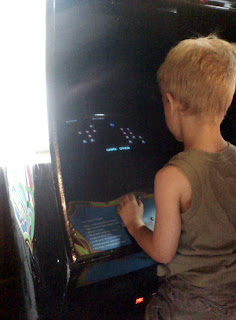 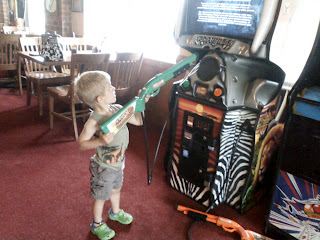 Once we finished lunch Ben suggested we should go play mini-golf which Zak thought was a very good idea. We have taken the boys to play before, but they would just hit the ball around and not really aim for the hole. This time Zak was really good at aiming for the hole and didn't get too frustrated when he missed. The big news is that he actually had a hole in 1! 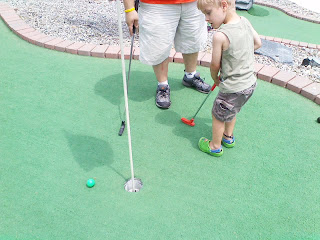 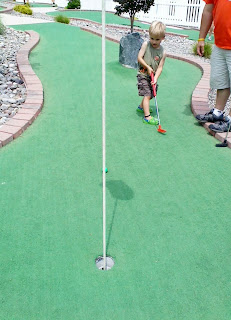 After mini-golf we went back to Colleen's and hung out for a while. Ryder & Jamison went to the Paca House & Garden with Christine which they both seemed to enjoy. When we left Annapolis Christine came home with us to spend the night. Christine and I decided to go and see the new X-Men movie in the theater and it was really good. This morning Ryder & I went to Kennedy Krieger for his Neuropsych testing while Zak stayed home with Christine. I think Christine and Zak had fun while I was gone because there didn't seem to be any complaints or bad news when we got home.
Ryder's testing went from about 9am until 1pm. There were a few short breaks in there so he handled it great. He is always very good at these types of tests since 1-on-1 with an adult seems to be his ideal situation. At the end they did go over some general results and findings, but I will get an in-depth report in a few weeks. Overall, his IQ is within normal limits for his age. He is functioning at a 2.5 year-old level for a section of the verbal skills which we pretty much already knew. We discussed all of his tantrums, anxiety issues, quirks, and so on. They told me that he does have certain traits under all 3 of the criteria for an Autism diagnosis however they do not feel he should be diagnosed with that. They said looking at the big picture he just isn't presenting as a typical ASD kid even though looking at all of the little "red flags" he does have. They are leaning more towards an ADHD/anxiety diagnosis, but did not diagnose anything today. Once again, they told me he is so "iffy" and borderline with everything that they feel we should not add a diagnosis yet. They want to re-evaluate him in 1 year to see how much progress he has made. They are going to try and help push through his referral to get in with the Behavior Therapy department which is good. We go to see the Developmental Pediatrician at Kennedy Krieger in mid-July so she will have more input then.