On Friday the boys and I had to drive to Annapolis because I needed to pick up a written prescription for my insulin. I usually just get the pharmacy to call for more refills, but this time the doctor's office called me and said they have a new rule about how many times they will allow you to get more refills through the pharmacy. I think it is annoying for medication such as insulin which we all know I would get very sick without! I also know I need to find a doctor who is closer to where we now live, but I have not really needed one until now. So I am working on finding a doctor to switch to who is closer to our house. 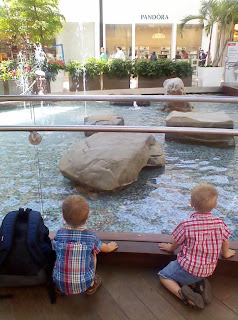 After we got the prescription I decided to go to the Annapolis Mall for a bit with the boys. I had sent Tracy a text message to let her know we would be at the mall for a while if she wanted to come meet us for a bit. I had also decided not to bring a stroller with us for this trip to the mall so I was hoping I wouldn't regret that! We walked around a few stores and when it became apparent the boys were starting to get restless I headed to the play area. They played for about an hour and then we headed to the food court for lunch. Just as we were finishing up eating Tracy texted me back saying her phone had been on silent so she was just seeing my message. After we talked for a bit she asked if the boys and I wanted to come over to see Kyle. I was so excited!
We got to Tracy's house around 12:30pm or so and Kyle was waking up. The boys had fun playing ball with Dave which gave me a good escape to hold Kyle. After a while the boys realized I was holding the baby, but they didn't care which is not normally the case. I got to feed Kyle and hold him for a while. Ben called to say he was on his way home from work so we decided to head out also. This was right around 2pm or so. 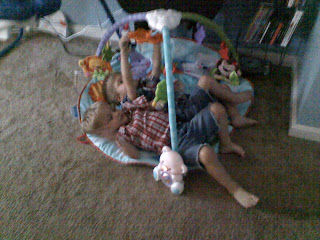 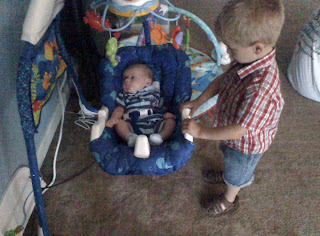 We said our good-byes and headed out. We got onto 97 and then a few miles down the road we ran into big trouble! I saw a big truck in the right shoulder just burst into flames. A few cars in front of me were able to get by before the first cop showed up, but I was not that lucky. There were about 10 cars stopped with me right by the truck and others had been stopped further back. We sat for a while before any fire trucks or other cops showed up. The truck was carrying lots of cardboard boxes which continued to set off more explosions. One of the explosions sent boxes into the bushes on the shoulder which then caught fire as well. The cars who had been stopped further back were being sent down an exit ramp, but we were still stuck. At one point we were told we might have to evacuate our cars and walk! I was freaking out since I had the boys in the car (now sleeping) and no stroller. After a while a few cops came to us and said if we would let them move our cars we could get turned around and leave. I finally made it home at 5pm! 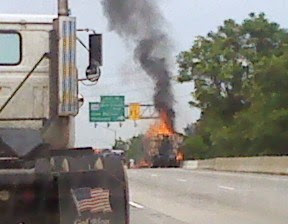 On Saturday morning we dropped the boys off with Nanny & Poppy for a sleepover. Ben and I then went to have lunch with Tracy, Dave & Kyle. For dinner we went to a Japanese Steakhouse since we would never go there with the boys. Sunday we went to Josh and Jen's wedding which was very nice. They are friends of ours from Dogwood. Ben and I ran into two other people from Dogwood at the ceremony. For the reception we sat at a table with Jen's current co-workers which was fun. We got a chance to talk with Josh for a while and we will hopefully be going to visit them in DE in the near future. I didn't take my camera, but took a few pictures with my cell phone because I LOVED Jen's dress! 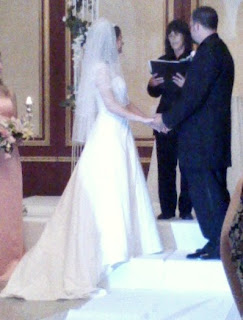 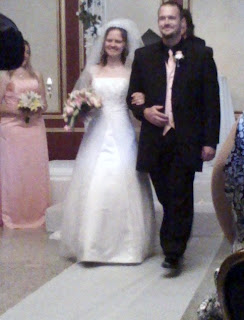 We left the wedding around 7:30pm and went to pick up the boys. We got home around 9pm or so and then it was bedtime. This morning I was woken up at 4am with the sound of Batman puking. I then discovered he had thrown up on my side of the bed twice along with twice in the hallway. Ben slept through it all so I cleaned up the puke from the bed and hallway then went downstairs to lay down on the couch. Unfortunately, I was not able to fall asleep again. So it has been a very long morning. I am getting ready to pack our bags, get dressed and head out to take Zak to daycare and Ryder to his therapy class...