Last night I got into the shower and as soon as I put my head under the water things went very wrong. The faucet in the shower came flying off and hit me in the leg. I called Ben up to the bathroom and he discovered that the pipe actually broke that holds the spout onto the bathtub. Basically, this meant that the shower would not work. And did I mention that Ben was leaving for VA early this morning and won't be back until Friday night. So last night he called the plumber that put in the waterline for our new fridge and scheduled for them to come to the house today.
This morning I took the boys to a playgroup which they both had fun at. Zak behaved very well and listened the whole time until it came time to leave. At that point he started to kick and hit me which was pretty embarrassing so we made a quick exit. The boys were pretty tired from playing so after lunch I was able to get them to actually take a nap.
The plumber showed up around 2:30pm and started working on the faucet. He looked at the faucet and wrote up the estimate for $307. About 20 minutes into the work he called me upstairs to tell me the bad news...he was going to have to remove and replace the hot and cold water pipes in the wall that went to the bathtub! Apparently, the pipes that were there are not made for water that is under pressure like going to a bathtub. The pipes that were there are used for draining condensation from the AC unit. Around 4pm the smoke detector went off (because the plumber was cutting and what not which created a lot of dust) which immediately woke the boys up. I was not very happy because it was obvious they were still tired, but wouldn't go back to sleep. Finally, around 5pm I thought the plumber was done, but when he did one last check he discovered something was not right so had to re-do part of his fix. Then around 5:30pm he was finally done. The final cost for this fix was $657!
Laura drove over after she got off work to pick up Zak since the plumber too so much longer than expected. After Zak left, Ryder & I went to BJ's to buy diapers, wipes, and fruit. I was able to get Ryder in bed and asleep around 8:30pm or so. I am looking forward to getting in our newly fixed shower and go to bed at a decent time.
Tomorrow is going to be a long day for Ryder & I. We need to leave around 9:45am to head to Johns Hopkins Rubenstein Child Health Building in Baltimore for our appointment with the pediatric urologist. This appointment is to determine if Ryder needs to have another surgery for his hypospadias (long story, but some of his doctors feel it was not fixed in the first surgery!). I am hoping they will say he doesn't need surgery, but I would rather find out now rather than later. Then we need to be at the Johns Hopkins Outpatient Center by about 2:45pm for Ryder's EEG test. This building is about 1 mile away from the Rubenstein building according to Mapquest so hopefully I will be able to easily find it without getting lost. His actual test is at 3:30pm, but they need us there early in order to fill out paperwork and get all of the leads connected and everything set up. Then once that is all done they will record his brain activity for 90 minutes. I am figuring we will be out of there between 5-6pm and heading home. I will call Rich when we are done so that he knows when to bring Zak to the house. I am not sure if I will actually get any results tomorrow or have to wait and hear from the geneticist.
Now for a few pictures....
Today VZ was all over the house and very cuddly long with playful. She was into everything and became extremely social. Robin was locked up most of the day because of the plumber so I think that is why VZ was so outgoing today. Here is a picture of her just hanging out with me in the living room... 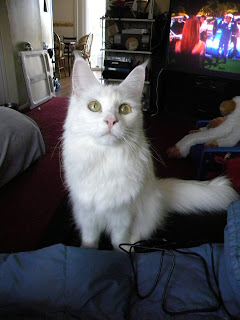 Here are pictures of the boys wearing their new shoes from Kohls. These shoes were originally $36, but we only paid $5.95 because they were on clearance plus we got an additional 15% off because I used the Kohls charge card! 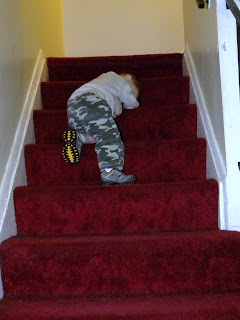 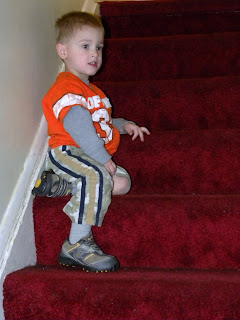