This weekend the weather was not as nice as it had been...there were more clouds, wind and rain with cooler temperatures. We continued the breathing treatments for the boys all weekend and they are started to sound much better with less coughing. Ryder still has a pretty bad runny nose, but it doesn't seem to be slowing him down at all. My plan is to take Zak to daycare tomorrow and go to Ryder's class since they both sound better and have been on the antibiotics for a few days. 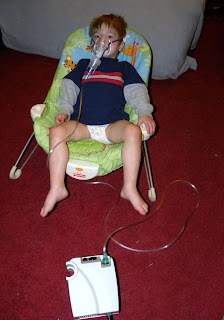 On Friday when Ben got home from work we all took a trip to WalMart so we could buy a lawn mower. The boys had a blast playing with the box... 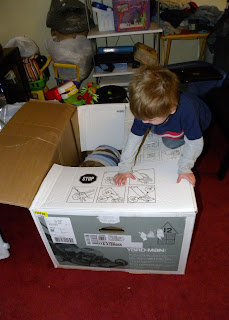 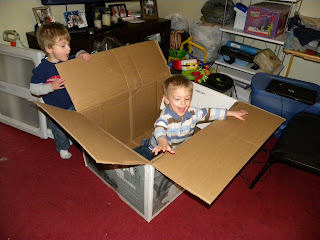 On Saturday morning we dropped Ben off at his mom's house to help Rich with something in their backyard. The boys and I went to Chick-Fil-A for breakfast then we went to Target & WalMart for a few things. Once we finished those errands Ben was ready to be picked up. We hung out at their house for a bit and then went to Panera for lunch. After a few more stops we went home. That evening Ben mowed the lawn which the boys enjoyed watching.
Today it was a pretty lazy day. I went out this evening to WalMart, but other than that we stayed home all day.
Now, on to the name of this post. It all started when we received the movie New Moon (the second of the Twilight series) from Netflix the day it came out on DVD. I was dying to see it and LOVED it! I ended up watching it three times before we mailed back (which was only about 24 hours after we received it). I decided I couldn't wait until June to find out what happens next so I went out and bought the third book, Eclipse. I started reading it on Saturday morning in the car while Ben drove us to his mom's house. I continued to read it during the car ride home and throughout the rest of the day. I then continued to read the book throughout the day today. Right before dinner I finished reading the book. I read 639 pages in about 34 hours which is BIG for me since I am not really a reader at all. But once I find a book that I like I tend to get hooked and can't put it down! Tonight when I finished the book I was more than eager to find out what happens in the last book. So I went to WalMart and bought the fourth book to start reading. Along with the book I also bought both of the movies from the series that are out so far...Twilight and New Moon. I am completely hooked on this series at the moment and plan to borrow the first two books from Chelley so I can read them also.