The last 2 days we have had gorgeous weather! It has been sunny and around 60 degrees Monday and Tuesday. The boys and I took advantage of the weather and spent lots of time outside.
Monday morning I dropped Zak off at daycare which he was not very happy about, but as always he was fine as soon as I would out of sight. Then Ryder and I headed to to story time at the library in Aberdeen. The Monday morning story time at that library is "hosted" by the Infants & Toddlers Program. The teachers from Ryder's therapy class are at the story time to help parents utilize skills the kids are learning in their therapy and in the class. I try to get to this story time as often as I can sot hat Ryder gets extra socialization time to work on his skills and it helps to have the teachers there for extra support and ideas. This week Ryder was not as cooperative as normal so one of the teachers had him sit with her and she actually got him to walk up to the front of the room and help with the felt board during one of the stories. That is a big deal for Ryder because it required him to interact with other kids as well as use his language skills. I was so proud of him! At the end of story time they always do an art project. This week the books were about food so they made necklaces using yarn and cheerios. Ryder put a few on the string and then I did the rest because he was getting frustrated with not being able to easily do it. Once the necklace was done he proceeded to eat every piece of cereal before we even made it out of the room! 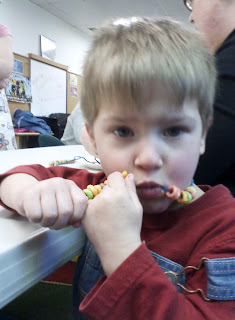 We then headed across the street to his therapy class. There were six kids in the class this week which is more than they have ever had in this class. Ryder was obviously overwhelmed because he wouldn't say a word during circle time, story time or music time. During art time he surprised us all when he actually finger painted because he normally hates having stuff on his hands. He didn't want to at first, but once I dipped his finger in the paint he enjoyed making circles. He did not get as messy as the other kids, but at least he had fun. His favorite part of the class was when they got to go outside and play on the playground since the weather was so nice. 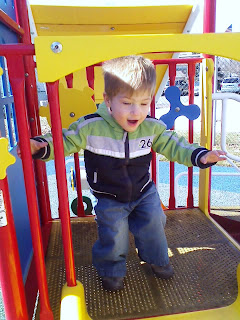 After class was over Ryder and I went to Chick-Fil-A to get some lunch and then picked up Zak from daycare. When we got home we decided to have a picnic lunch on the front steps with our Chick-Fil-A! 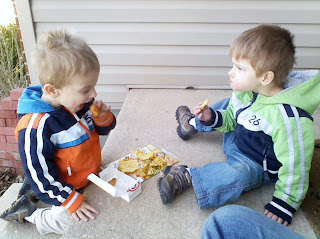 Monday evening when Ben got home from work he wanted to pack up a picnic dinner and take it to the playground since it was still so nice outside. So that is what we did. Although the boys didn't actually eat while there we all had a good time. 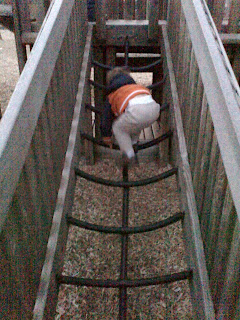 Yesterday I took the boys outside to play in the front yard for about an hour while we waited for Ryder's OT to get to the house. They enjoyed bouncing rocks off of the snow tube. They also tried to climb the tree in the front yard and we took a walk around the community. 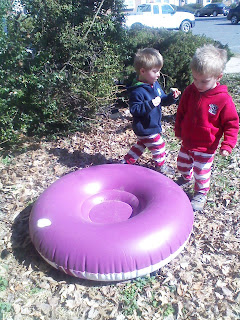 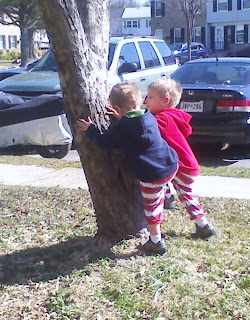 This nice weather has me very impatient for Spring to get here! Today it is cloudy and cooler. It is supposed to rain off and on the rest of the week and through the weekend so I am not sure how much time we will get to spend outside.
I also wanted to update everyone with some stuff about Ryder. The pediatrician wants him to see a Pediatric Nutritionist because of his issues with weight gain along with his limited diet and chewing issues. I was able to get an appointment for Friday morning, but then I found out our insurance plan will only cover a Nutritionist if you have Diabetes and not for anything else. I was pretty upset about this so the insurance person got me in contact with their case management program. I spoke with a nurse from case management last night and she is going to contact the pediatrician to get growth charts and what not. Then she will try to convince the insurance company to make an exception and allow Ryder to at least see the Nutritionist once. She said she can't promise anything and it won't happen quickly, but she will do her best. We really want to see the Nutritionist because he is already on a dairy-free diet and we are really thinking about going gluten-free as well for various reasons, but the appointment would be about $500 if insurance won't cover it so that is not possible for us.