Zak is definitely the stereotypical 2 year old. Unfortunately this includes many of the unwanted terrible two behaviors we all dread. He has mastered the art of throwing a temper tantrum no matter where we are. For him it seems the more public the better, the louder the better, and the more embarrassing the better. Now that he is talking he has started to learn the art of talking back. His favorite phrase at the moment is "NO, I don't want!" which he uses all the time whether it is during diaper changes, mealtime, errands, bedtime, and so on. He has also seemed to have lost his ears recently meaning he doesn't listen to anything or anybody. Zak is a very strong willed boy!

He has also become a pretty talented escape artist. The other day he showed us he knows how to unbuckle the crotch strap on his car seat and then get his arms out. We already knew he could climb out of the pack-n-play, but he demonstrated that to us everyday while on vacation. This morning he was knocking on my bedroom door at 5am because he has opened his door, closed his door and come to my bedroom. He seems to be able to climb just about everything to get to whatever he wants. He is just too smart for his own good.

The hardest behavior for me to deal with has been his hoarding. Yes, my son is a hoarder. This all started at home when he would take toys from Ryder and make a pile. Then he would sit and guard this pile so Ryder couldn't take anything back. It got to the point where Ryder wouldn't be able to play with anything because within minutes of him picking it up Zak would grab it away from him. We have been working on this with him at home and thought it wasn't too big of a deal. Recently, it has gotten worse. Now, he gets mad if we (Ben or I) try to take something from his pile of treasures in order to give back to Ryder. And he has started to do this out in public at the playground in the sandbox. He starts by collecting all of the unused toys and then moves on to grabbing toys form other kids for his pile. We had to leave the playground yesterday because he would not stop and was getting very worked up about not being able to take all of the toys. Last night while at Barnes & Nobles he started to do this with the trains at the train table in the children's section. I am not sure if this is a normal phase or something to worry about. I am thinking he might need more socialization with kids (other this Ryder who is a push over apparently) so we might be looking into some sort of class to do.

Here are a few pictures of my little "angels".... 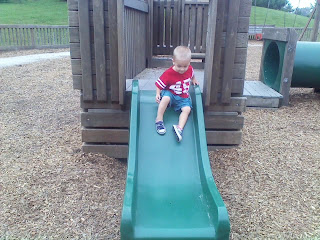 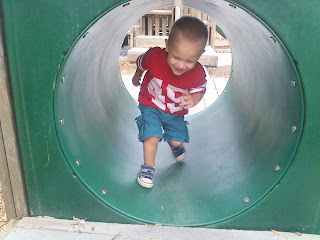 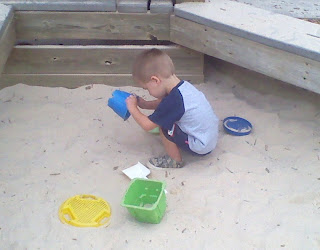 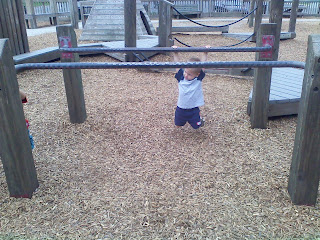