That Time of Year

Yesterday afternoon Rich & Laura brought the boys home from their sleepover. It seems like they had a good time as always. I laid them down for a nap, but Zak was very whiny and just not himself. When I picked him up I felt that he was burning up. I took his temperature which was 101. So I gave him some Tylenol and put on Barney in the playroom for him to watch. About an hour or two later he was crying and just curled up in a ball so I took his temperature again and it had gone up to 103. Since I don't have any Motrin we had to get in the car and run to CVS to guy some. When we got home I gave him a dose and he laid on the couch watching Barney.

I called the pediatrician's office and the nurse took my name, phone number, and asked what was going on. She said that the pediatrician would call me back because they were pre-screening everybody before making appointments. This is one of the ways the office is trying to avoid spreading germs more than necessary. When the pediatrician called they told me to treat his symptoms (Tylenol, Motrin, saline nasal spray, etc) for now. If he continues to have a fever (above 100) for 3 days, has difficulty breathing, shows signs of ear infection or strep throat, or stops drinking we need to call back and schedule an appointment to come in. 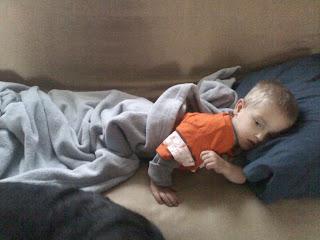 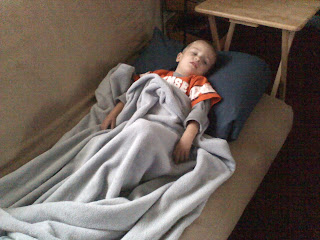 Last night he just wanted to sit in my lap which is fine. I gave him another dose of Tylenol at bedtime and he slept through the night. This morning he woke up with a fever of 101, but seems to be more himself. His nose is pretty stuffy today, but it doesn't seem to be causing any breathing issues. He will play for a while and then lay down and start to whine for a bit, but then he gets up and plays more. Here are a few videos of my sick boy and Ryder...

Looks sick to you, right?
They are obsessed with the suitcases
And here they are crashing
On to the name of this post...it is flu season once again. The boys got the seasonal flu shot on Saturday, but we have decided not to get the H1N1 shot. With their asthma and Zak's lack of immune system we will once again be using hand washing and other precautions throughout the flu season. We are going to try and avoid crowded indoor areas and stay away from sick people in general. We have stocked up on the medication for our nebulizer along with their inhalers to help battle any colds or dreaded pneumonia.

Sounds like what's going on around here too. I hope he feels better!