Friday morning Ryder's occupational therapist (OT) came to the house during breakfast to do a feeding evaluation. She watched how Ryder used the utensils (fork and spoon), how he chewed various foods (different textures and sizes), and how he drank from a cup without a lid. After watching for a little bit she told me what she was seeing and things we could work on. First, she agreed that the whole task of eating is very daunting to Ryder and that is obvious just from watching how he fights the whole process (doesn't want to get in chair, doesn't pick up utensils, wants to have us feed him). In order to make the process of eating more enjoyable for Ryder she told me that we need to break up the skills used into smaller more manageable ones for him.

First, she taught me the concept of reverse chaining....the child is guided through all of the steps of a behavior except for the last, which he completes on his own. As he becomes successful with the last step, the teacher begins to guide him through all but the last two steps, and so on until the child is able to sequence the entire behavior independently. Ryder is able to put the food in his mouth on his own so that is the last step of the behavior. We help him pick up the fork, hold it correctly, target the food, and then we wait for him to press down to stab the food. Once he masters that step we will then get him to target the food on his own and so on. It was amazing how happy he was when he realized he could stab the food on his own and then take it to his mouth! The OT said hopefully over the next week we will be able to slowly move onto him being able to do more of the steps in the process on his own. The goal of reverse chaining is to make the entire task of eating less daunting by helping him with tasks he does not feel comfortable with and in turn teaching him how to complete the task on his own.

Second, she noticed Ryder still has a weak chew and his tongue is still not properly moving the food from side to side in his mouth while chewing. The OT feels this all goes back to his low muscle tone. During her next session she is going to show me some exercises to do with him in order to strengthen his muscles to help his chewing become more effective. She said that his weak chew could be the reason he spits a lot of food out because he gets frustrated with chewing, but doesn't feel comfortable swallowing what is in his mouth. Also, this could be another reason he sees eating as a daunting task. If you were not able to chew your food would you want to eat?

Third, she brought a special cup for Ryder which is called a "nosey" cup because it has a cut out on one side which allows him to drink without having to hold up his head (which he has trouble doing because of the low muscle tone). This cup holds smaller amounts of liquid than a regular cup, but Ryder is able to drink great out of it! We will let him drink out of this cup for the majority of the time until we can get his muscles stronger to make drinking out of a regular cup easier.

After we finished going over all of the feeding concerns we moved on to working on the stairs with Ryder. She lined up some animals on either side of every few steps. She then had Ryder walk down the stairs, stop and bend over to pick up the animal and put it in the bag until he got to the bottom of the steps. Then he had to turn around and walk back up the stairs while carrying the bag of animals. This task was to see how well he can do the stairs without holding onto anything, hence the reasoning for him to carry the bag of animals. The OT discovered that he would do the task only when he could hold onto one of her hands. She also noticed that he has a pretty big issue with balance which is causing him trouble on the stairs. The last thing she said that is probably causing him issues goes back to having the low muscle tone. For now, we are going to work with Ryder on going up and down while holding onto one of our hands.

The OT is going to be coming back on Tuesday next week to work on the feeding concerns during lunchtime. She also told me we should have the physical therapist (PT) come to do an evaluation on Ryder. He is not delayed in his gross motor skills, but the PT is who would help us with his low muscle tone. The PT will be able to determine just how much muscle tone he has and give us activities and exercises to do with Ryder to help strengthen his muscles. The request for PT has been put in at their office so now I am just waiting to get a call to schedule their visit.

Friday afternoon Ryder's new speech therapist (ST) came to the house for her first session with Ryder. (Our other ST is now on maternity leave) I will just say that I am not a fan of this woman at all! She showed up at 12:30pm (the scheduled time) and then we went to the playroom which is where we have all of the therapy sessions. She never introduced herself to the boys, she left her jacking on the whole time, and she called Ryder by the wrong name! She did three activities with Ryder which had nothing to do with the skills we have been working on with the other ST. After that she wrote up her paper and scheduled another visit for next week (normally it is only every other week, but I know Ryder needs more so I didn't say anything) and left. Her total visit time was 25 minutes and the ST sessions are supposed to be 45 minutes long! I did call his case manager about the visit and she explained that all of our old ST's clients had been split up between other ST so they were all overwhelmed at the moment. She told me to see how next week goes and if it is still not acceptable (to me) that she will speak to her. I know Ryder felt very uncomfortable with the new ST because he hardly said a word and he was very talkative with the OT earlier in the day. I hope things get better because speech is one of our main concerns for Ryder and it would be horrible if he misses out on good ST until the old ST comes back in April. 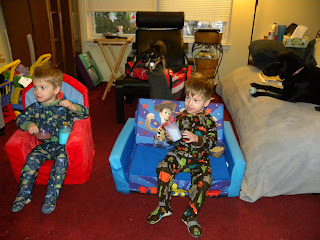