I realize I have not posted since Tuesday so I will do a quick update on how our week went.
Wednesday we didn't do anything special really.
On Thursday Ryder had his special educator come to the house for a session and then we went to his private speech therapy session in the early afternoon. When Ben got home from work we got in the car and headed to Arundel Mills Mall. Rich met us there to take the boys for a sleepover. Ben and I then ate at Chevy's for my birthday. He definitely had a surprise in store for me! While we sat and waited for the check I felt something drop onto my head and then people started to sing Happy Birthday to me. I definitely turned red at that moment, but then enjoyed the dessert.
Friday morning I ran a few errands which included a trip to the library. I needed to make a bunch of copies of paperwork for a meeting I had for Ryder in the afternoon. I also had the chance to look at books for myself without feeling rushed which was very nice. I ended up getting two books about the IEP process (going through it for Ryder) and New Moon. I then headed home to have some lunch and go to Ryder's meeting. The meeting was at a local elementary school and was held to discuss Ryder's eligibility for services through the county special education pre-school. All of his therapists talked about their recent evaluations and then they allowed me to explain his recent medical testing and results. The special ed pre-school teacher was at the meeting as well to learn about Ryder. It was decided that Ryder qualifies for the pre-school program so I signed some paperwork saying we wanted to enroll him in August when he turns three years old. We then set up a time for the IEP meeting which will be June 4. At this meeting we will go through and write out several goals for Ryder to work towards while taking part in the pre-school program. Once Ben got home from work we went to pick up the boys from Rich & Laura's house.
Saturday morning we went out to run some errands. Our first stop was Toys R Us to buy the boys a sandbox and sand. They love their crabbie sandbox! We mixed some regular play sand with blue colored sand in the sandbox for them... 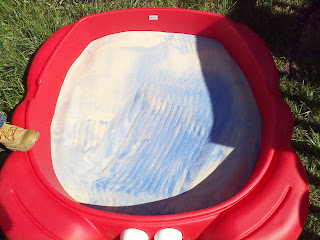 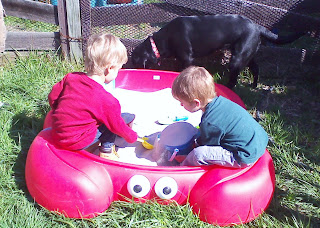 Then the boys helped Ben mow the yard... 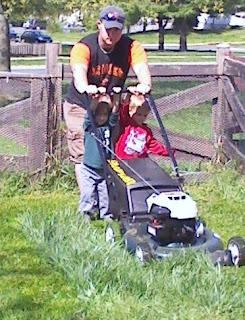 Around 12:30pm we got back in the car and drove to the Eastern Shore for a huge Easter egg hunt. The egg hunt was being held by some friend's of ours from Dogwood Acres so that was fun getting to see them and they got to see how much the boys have grown. This event was huge! They had a moon bounce, egg toss, egg races, duck pond game, food, Easter bunny, and so much more! There were 500 dozen eggs for the egg hunt so all of the kids got tons of eggs. Some eggs had candy in them while others had tickets for bigger prizes that you picked out in a special tent. The boys ended up with lots of candy, little toy motorcycles, blow-up guitars, and duck stuffed animals. 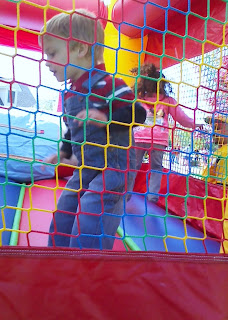 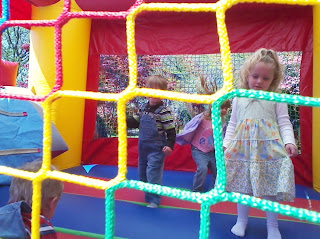 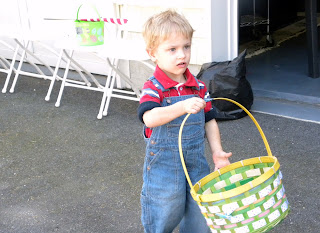 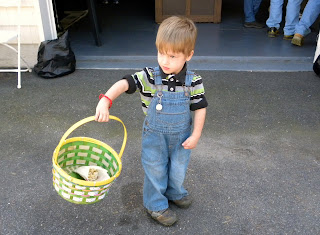 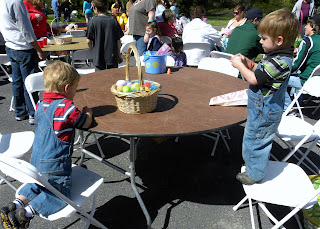 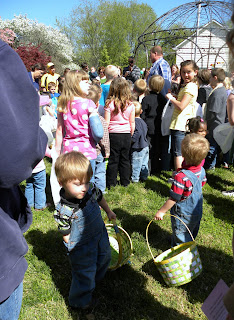 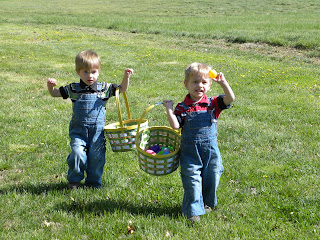 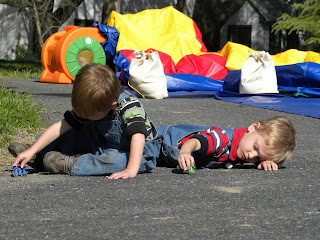 Today we don't have many plans. This afternoon Ben is going to help Rich & Laura get a new table from BJ's for their backyard. As it gets warmer outside today we will probably let the boys play in their sandbox for a while.
This coming week Ryder has his toddler group (Zak will go to daycare which he has started to really enjoy, no tears when I drop him off anymore!), Ryder has OT and PT coming Tuesday, Ryder has speech on Wednesday and Thursday.
I need to find some new books that I can get into as much as I have with the Twilight series. I finished reading New Moon last night which leaves me with no more Twilight books to read! There is a new novella coming out by the same author about one of the minor characters in one of the Twilight books. I am already on the waiting list at the library to get that book.