Wednesday night was bad, really a nightmare. All of a sudden around dinnertime the boys both started to misbehave and have major attitudes. I needed to get a few things done at the pediatrician's office and I needed to get out of the house so after dinner I left to get somethings done. While I was gone I got a few text messages from Ben with pictures showing me something the boys got into while he was in the bathroom. They decided to get into a bunch of dry erase markers which were on the top shelf of the bookcase in our bedroom. By the time Ben found them they had colored all over themselves, the floor, a few random objects and Zak had colored his new Toy Story crocs! Ben was able to get the boys and floor completely cleaned up by the time I made it home. When I walked in the kitchen I found a very wet floor! The boys were splashing so much in the bath tub that water had been leaking down into the kitchen. I got that cleaned up and then we got the boys out of the bath tub. Zak was in a horrible mood and cried, yelled, kicked, and hit so we decided it was bedtime even though it was only 7pm. We put them to bed early and they both continued with their tantrums for a while before falling asleep. I then started to try and clean off Zak's crocs, but they did not come clean like everything else. I have been soaking them in water and scrubbing them, but the black marker is not coming off!
Thursday morning we were all awake by 6:30am. The boy had breakfast and got dressed. Then around 8am all four of us went outside to wait for Ryder's school bus. Ben went to work late so he could be home when Ryder got on the bus. All morning Zak continually told us he wanted to "share Ryder's bus" meaning he wanted to go with him on the bus. We told him he was staying home with me, but that didn't seem like as much as fun. When the bus showed up Ben held Zak because he tried to run into the street to get on the bus. I walked Ryder up to the bus and he immediately took the aid's hand and was on the bus and buckled in ready to go. I got some paperwork from the bus driver and then they were off. I felt good because Ryder seemed happy and not upset at all. BUT then I turned around and realized what Ben was dealing with. Poor Zak was in a frantic meltdown crying "I want my Ry Ry. Give my Ry Ry back!". I was so sad for him that I felt tears starting. Ben left for work and Zak & I got in the car to make a trip to WalMart. However, we made a detour to Ryder's school. His teacher told me that many parents will come and watch the kids get off the bus for the first time so that gave me the idea to go and get a picture! I stayed in the car while other parents got out to get closer, but luckily I have an excellent zoom on my camera. Seeing Ryder get off the bus also seemed to help Zak understand Ryder was at school and just fine. Then we were off to WalMart. 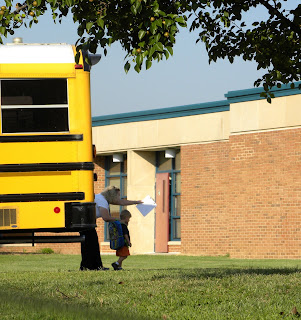 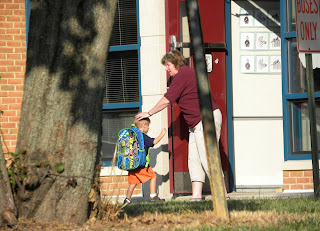 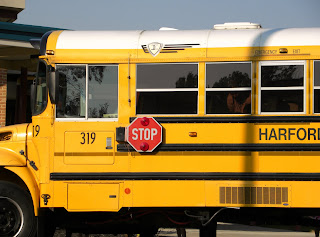 Once we got home from WalMart I told Zak it was time for his "school". He was very excited to get to do school also. I have a few workbooks and a program I plan to slightly follow, but we need to work on some basics first. We worked on tracing lines. These are pre-writing skills. Once he has this down we will be able to move onto learning how to trace and eventually write the letters and numbers. He also did a worksheet with a few simple mazes to work on his hand-eye coordination which he did great with! 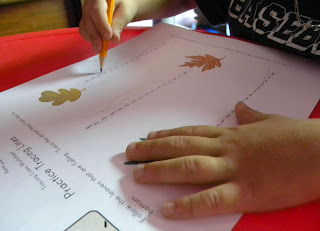 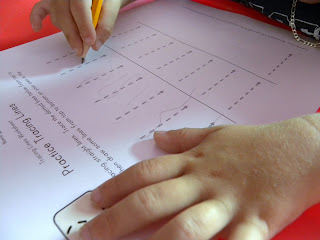 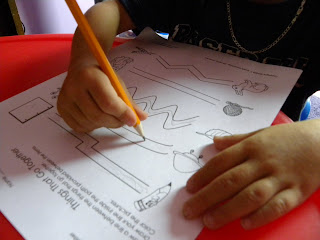 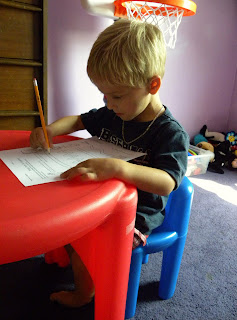 After we were done with his worksheets I put stickers on them and we put them in his folder to show Ben when he got home from work. It was then time to go outside and wait for Ryder's school bus. Zak played with the tree and ran around for a bit while waiting. 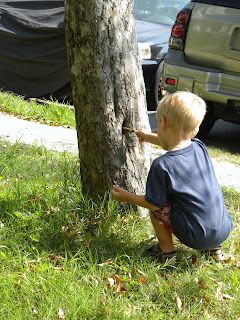 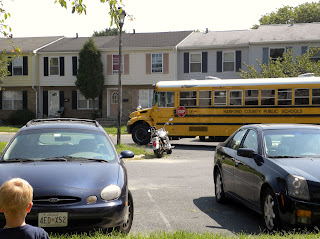 Ryder came home in a very good mood so I am assuming everything went well. He didn't have a note saying anything bad happened which is good. The teacher said she would write notes if something really good or bad happened during school since she wouldn't be able to write a note home everyday for every kid. Ryder did have a band-aid on his finger, but when I took it off there was nothing there. We figure he probably fell or something and was upset until they gave him a band-aid because he does this at home with us. 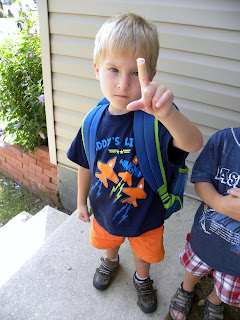 The boys then had lunch and played in their playroom until Ben got home. 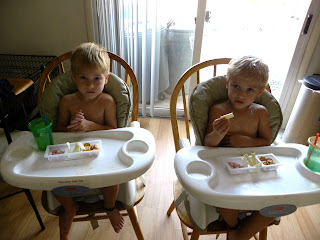 A little before Ben got home, Zak had a major meltdown with hitting and everything. So I put him in his bedroom for a time-out and to calm down but then he fell asleep. I know he still needs a nap periodically, but he refuses to. As soon as Ben got home Ryder was excited to show off his schoolwork he brought home (certificate for having a good first day and a paper where he glued pictures of the different activities they did in school). A few minutes later a guy from an AC company came to give us an estimate. While he was here Zak woke up and ran straight to his folder to show Ben his school work. It was so fun to see how proud of himself he was!
I have worked out what my goal for a schedule during the week will be:
Monday: library story time with both boys
Tuesday: schoolwork with Zak while Ryder is at school
Wednesday: Zak's YMCA sports class while Ryder is at school, errands if needed
Thursday: schoolwork with Zak while Ryder is at school
Friday: work on coloring/cutting/tracing skills with both boys