This weekend I made an escape from the house and left the boys with Ben. I left the house on Saturday morning around 5am and headed to Rose's house. I then rode with her to VA for the National Capitol Cat show. I had so much fun seeing friends in the cat world, having adult conversation, grooming and showing the cats and just being out for myself for a bit. I got back home around 7pm, but had such a good time that I went back on Sunday also. Sunday I left the house around 6am and got back home around 6:30pm or so. I was able to make this get away since we were able to borrow Laura's car while they are away.
Here are some pictures of the kittens that I helped show... 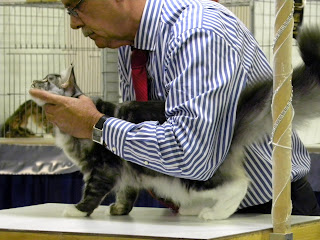 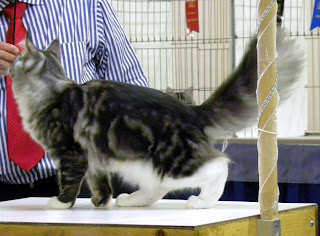 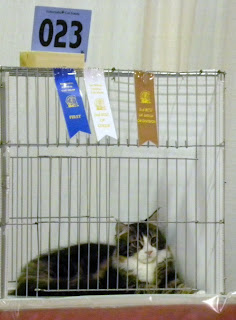 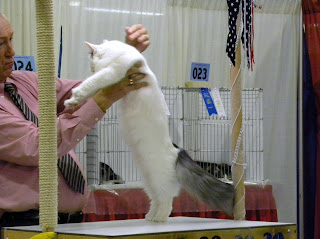 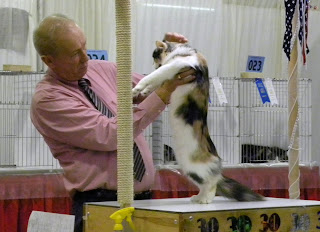 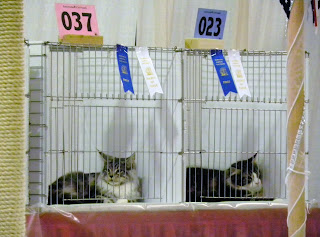 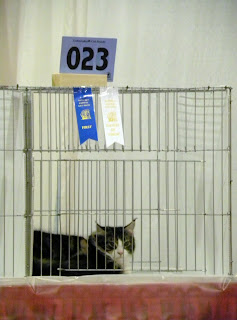 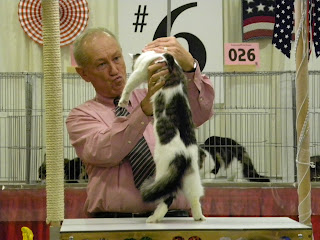 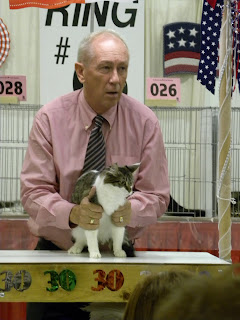 While I was gone on Saturday Ben & the boys went to Rich & Laura's house to check on the cats there and then visited with one of Ben's friends from high school for a while. On Sunday they stayed home watching football for most of the day. I did get text messages from Ben showing my Zak cuddling with VZ and Sam... 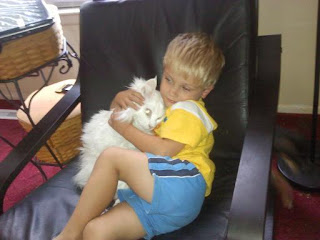 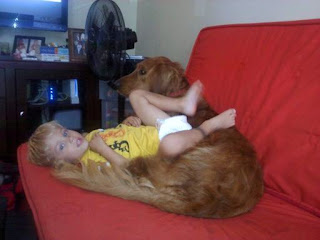 I showed the picture of VZ and Zak to many people at the cat show and they all loved seeing how well VZ was doing with the boys. You wouldn't think that a deaf cat would do well with two 3 year-olds, but she is a perfect fit in our house. Stella showed VZ as a kitten and an adult for a while so many people at the show knew of her and of my boys so they enjoyed seeing the picture. I also got a call from Ben on Sunday telling me how bad the boys had been since they woke up and went on to tell me some of the things they had gotten into. I did feel guilty for having such a good time while he was dealing with the chaos at home, but I also felt good that he was experiencing what I go through on a daily basis!
Today Ben took off from work because Ryder had a doctor's appointment at Hopkins and Rich & Laura are away so they were not able to watch Zak. I decided taking Zak to this appointment would be difficult because it was a consultation with the swallow study doctor so she was going to as lots of questions and watch Ryder eat & drink so I figured it would take a while and Zak would probably get bored pretty quickly. At the appointment the doctor watched Ryder drink from various cups (sippy cup, straw cup, cup with no lid) and eat some different textured foods such as applesauce and cereal. The doctor we saw today works in the Pediatric Pulmonary department at Hopkins, but she is actually a speech therapist who works with chewing/feeding/swallowing issues. We walked away from the appointment with the following....
(1) Ryder is scheduled for an x-ray swallow study on September 23. This will allow the doctors to see exactly what is happening when he swallows liquids and food. They will look for any aspiration of liquid into his lungs (possible cause for his many pneumonias). They will also be able to determine if his airway and other anatomy is formed and shaped correctly.
(2) Ryder's chew is not efficient. I forget the exact wording the doctor used this morning, but she said he is not chewing efficiently or correctly. While watching him eat the dry cereal she could tell that it takes him a lot longer or more work to chew than it should. We knew he has always had a weak chew. Her advice was at meals to always give him something soft/easy to chew with a high calorie count and then offer him the crunchy or harder to chew foods. If he only eats the harder to chew foods then he takes long to eat and tires out quicker so he won't get enough food inside of him at the meal. She also suggested that he would probably take in more food over the day if he ate several little meals (more of snacks) because she noticed after sitting for a full meal his chewing would get worse and worse.
(3) She suggested that Ryder should drink out of the straw cups.
(4) She thinks he should see the pediatric pulmonologist since he never has and he has the lung issues going on. We are going to wait until after his Sweat Test on Friday because if it does come out positive (hoping it doesn't) we would see a whole new set of doctors. If it is negative we will make an appointment with the pulmonologist that works with his geneticist.
Tomorrow schools are closed for elections. On Wednesday Ryder has school and Zak has his class at YMCA. Wednesday evening once Ben is home from work we are taking the dogs and their stuff back to their house since Rich & Laura will be coming home from Myrtle Beach that day. On Thursday Ryder has school, AC guy is coming to show us their estimate, and we have the HOA meeting. On Friday Ryder has his sweat test. Saturday we are going to the zoo with Tracy, Dave & Kyle.