Today was the last day of Zak's 8-week YMCA class. The class was called mixed sports. The sports they played included soccer, basketball, and t-ball. Today they did a bunch of fun games that are part of the class called Gym Games. Zak loved all of the activities they did today so I ended up signing him up for the next 8-week session for that class. He will go Thursday mornings from 10-11am for the Gym Games class starting next week.
The first thing they did was a relay race with an obstacle course. They had to sit on a scooter and go through cones, then hop through some hula hoops, put a bean bag in the box, spin around 3 times, and race through a tunnel. 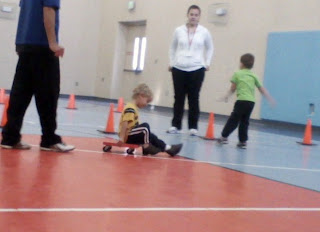 At the end of the class all of the kids received a certificate along with a shirt. 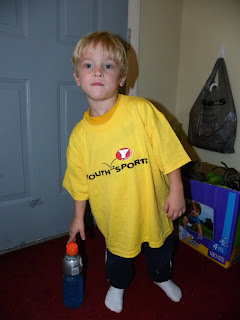 The kids loved all of the activities which involved using the parachute! Here they lifted it above their heads and got under it...
Here Zak and one of the other boys sat in the middle. Then the rest of the kids/coaches wrapped them up in the parachute. Once done they pulled hard and it spun the two in the middle, pretty cool.
They played What Time Is It Mr.Fox...
This game they had to collect as many balls as possible. They also played it where the coach would call out a color and the kids had to only get that color ball.
They also played some bean bag toss games as well as other games with the bean bags which required the kids to know colors. I think this class will be great for Zak because they are short, educational, and active games!