First, I wanted to show everyone the new shoes that "Grammy" bought for the boys last week. They are both so excited when they get to put on their Buzz & Woody shoes. 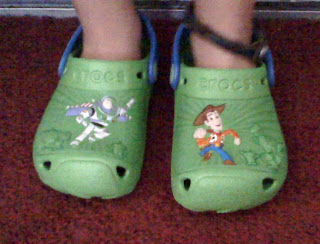 Wednesday our day started out as usual when one of the boys has pneumonia....nebulizer treatment while watching cartoons. 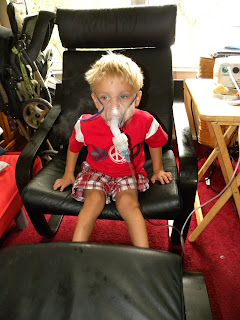 Then we went out to BJs to look at the preschool workbooks they have. I ended up getting two workbooks for Zak, Reading and Math. We had lunch at home and then I tried to get the boys to nap, but it didn't work. Instead, they got into their closet and wrecked it! They had pulled down most of the clothes on hangers, pulled out the bins and emptied them and so much more. I was not happy because it had taken me a while to finally get the closet organized since I had to empty the dresser (because they kept emptying it all over the bedroom!).
Finally, I gave up and let the boys go outside to play. They like to play with their car, but recently have started to use it in different ways. Their favorite thing to do with it is.... 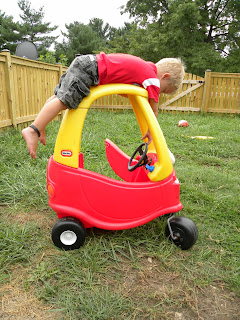 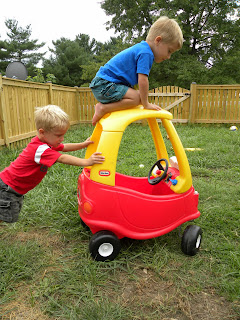 Sometimes it tips over, but they laugh 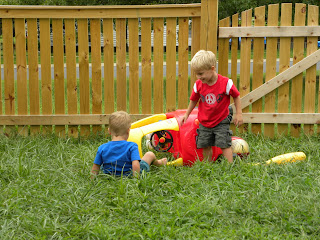 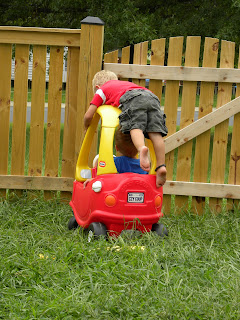 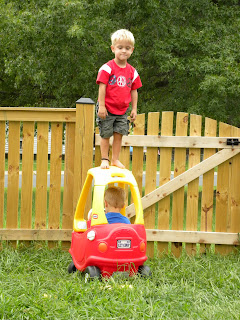 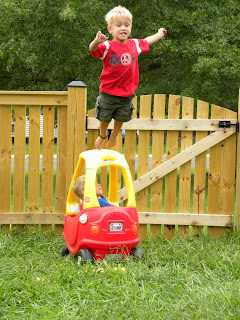 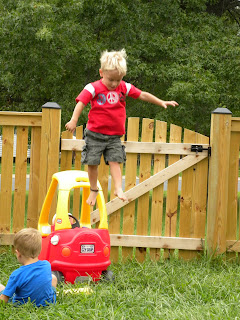 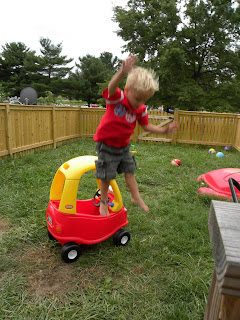 They had a blast and nobody got hurt. Zak is such a climber and loves to jump off of everything. We have had to make a rule of no jumping off furniture. Because of his love to jump and the new rule we have to give him some areas to jump and outside seemed like a good place.
Ryder reading his new magazine
(subscription was a gift from Tim & Peg) 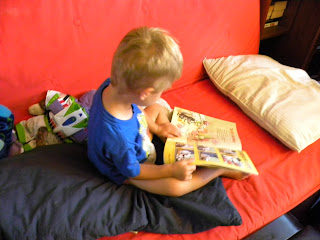 Yesterday we went to the post office to mail pictures of the boys to various family members. Then we stopped at Target looking for some new jeans for Ben since he discovered a hole in his last pair. We were unsuccessful in finding any because unfortunately his size is difficult to find in most stores. I was able to get the boys to nap which was good, but it required me to lay down with them in my bed so I wasn't able to get anything done.
Once Ben got home from work we all got dressed and headed to Ryder's school. They had a Meet & Greet combined with Back To School Night last night. Originally, the plan was for all four of us to go, but when Zak got sick the beginning of the week we decided just Ryder & I would go. Ben really wanted to go and see the school because he wants to be part of the boys' schooling so yesterday we decided that all four of us would go since Zak was no longer having coughing spells and seemed to be doing really good. We first signed in, looked around at some information posted in the lobby and then had dinner in the cafeteria. They had bags with a sandwich, chips, and cookie along with juice or water. The boys loved sitting at the big tables with all of the other people while eating their dinner! 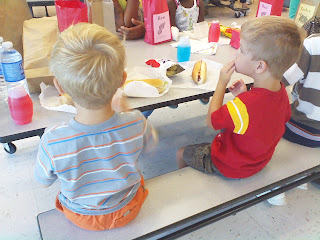 After they were done eating we went to Ryder's classroom to meet his teacher. The boys played for a few minutes and then we went to the gym to meet the principal and learn some stuff about this upcoming school year. After that was over we went back to Ryder's classroom for a presentation about the special education preschool. During that the boys played with a few other kids (Ryder actually spent most of the time playing with his teacher). Once that was over I got to talk with his teacher for a bit and then we headed home. I did find out from his teacher that Ryder might be in a car seat on the bus because of how little he still is. When we walked in the room she took one look at him and asked me how much he weighed because she thought he might need a car seat and not just the vest for the bus. So she is going to call the transportation people and let them know they might need both on the first day so they could decide once they see him.
This morning the boys woke up around 6:30am (maybe a little earlier)! Ben was getting ready for work so he got them started with something to drink so I could lay in bed for a bit longer. I got up just before Ben left for work. The boys were ready to go for the day so we got dressed and went to the playground. It was only 67 degrees when we left so I put light jackets on them which later did come off once it warmed up a bit. We were the only people at the playground for a while, but just before we left two or three more families showed up. 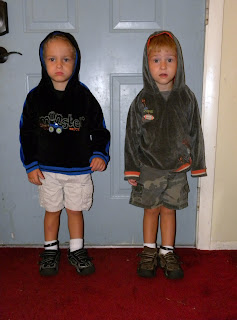 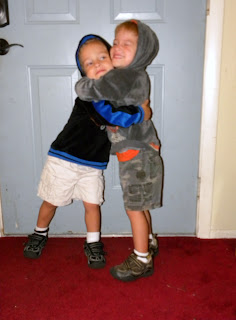 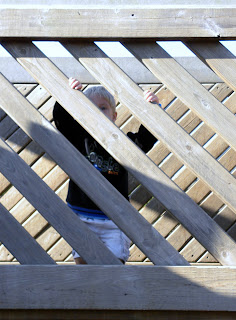 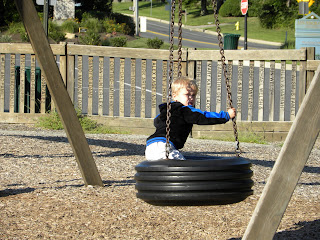 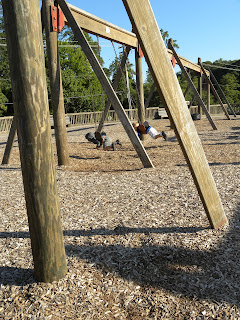 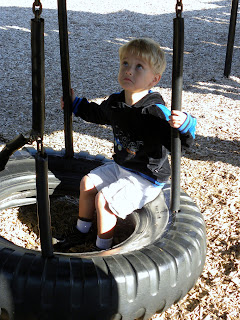 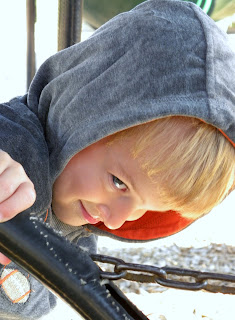 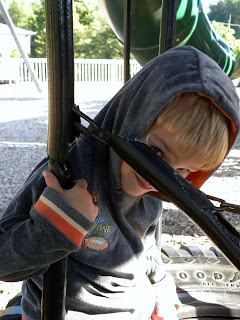 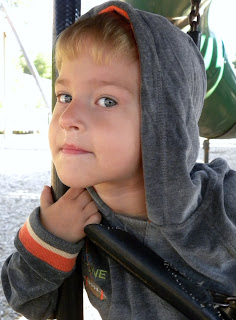 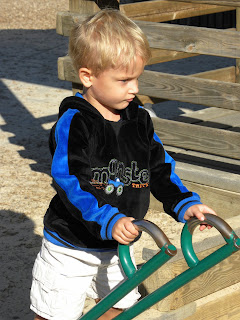 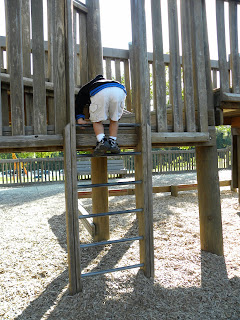 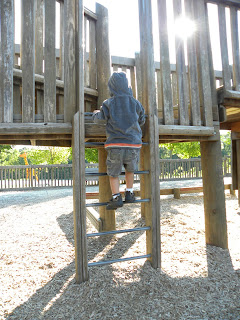 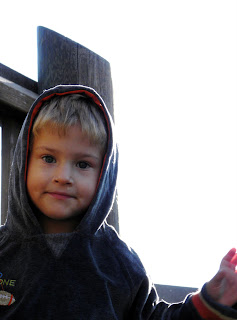 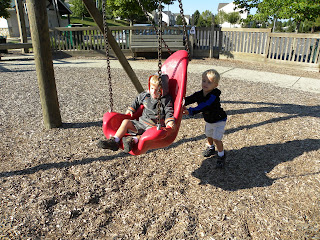 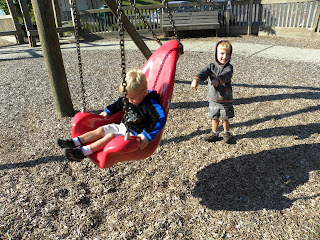 This weekend we had planned to go to Maryland Renaissance Festival since Ben & the boys have never been and I love going, but due to financial issues (as always) we are not able to go. I am hoping we will be able to make it there at some point this year though! We do have some free tickets to the Maryland State Fair that we plan to use next weekend, but we might look into going twice since the tickets are free. Just have to tell ourselves we can't spend any money while there.