Yesterday after nap time Ben and I discovered that Zak is now able to open the dresser drawers! We went in their room and started playing with them when I noticed some clothes on the floor. I went to pick them up and saw that one of the dresser drawers was open and all of the clothes had been taken out and thrown all over the floor. The drawer had then been filled with several balls. We know it was Zak because he has been showing interest in the drawers for a while now. 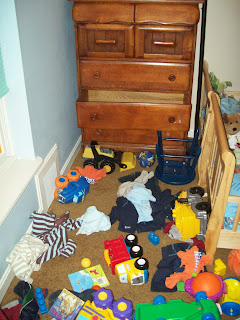 Today Ben and I took the boys to the mall for a while. We had hoped to meet up with Colleen and her grandparents, but timing didn't work out. We walked around the mall for a bit and then took the boys to run around in the play area for a bit. Usually Ryder gets the attention from little girls while there, but today it was Zak's turn. There was a girl who started following him around, holding his hand, helping him up the steps to the slide...it was pretty cute. I did get a few pictures of the two of them together. 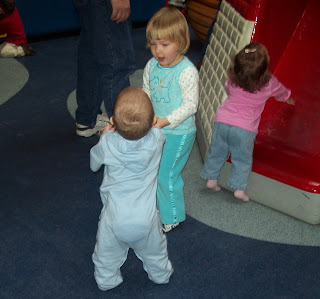 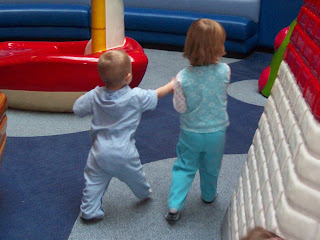 While at the play area Ryder decided to try and walk around a bit without any help. He would pull up on the wall or other things and then let go and start walking. He did pretty good considering there were a ton of kids there that would knock him over. 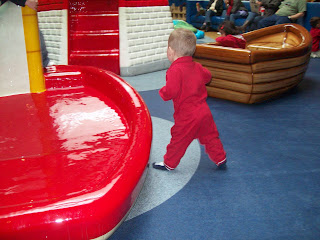 After playing for a while we decided to get some lunch since it was already close to 1pm and the boys were getting cranky. The food court was pretty busy so we didn't get any highchairs. Ryder ate in the stroller and Zak sat like a big boy in a chair at the table. It was pretty funny because his head was just barely above the table, but he did great. He also wanted to eat his nuggets and fries out of the box and not off the table. 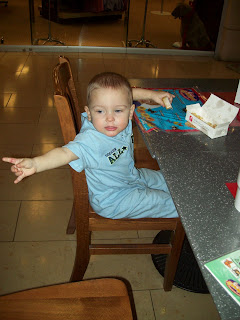