A Day of Firsts

Today was a day of firsts for both of the boys. This morning around 10am I dropped Zak off at daycare! He is going to an in-home daycare provider on Wednesday during Ryder's class. As soon as we got there Zak started playing with the 13-month old boy who is "all boy" and rough just like Zak. When I went to leave Zak didn't even care, but Ryder had a meltdown because he wanted to stay and play also.

After we left Zak at daycare Ryder and I ran a few errands before his class. We went to Michaels to look for some crafts, Toys R Us to buy some diapers and then we got some french fries from Chick-Fil-A and then went to his class. This class that I am talking about is a group therapy session that works on language skills, socialization skills, motor skills, and so much more. It is an additional therapy session for Ryder which will be weekly on Wednesdays. They have it set-up like a pre-school classroom and it is run like one as well, but only for 1 hour. They did free-play, circle time, art, gym, music, and then the good-bye song. Today there were only 2 kids in the class including Ryder because a few were sick and others were turning 3 this week so no longer are in the class. Normally there will be 8 kids in the class each week. Ryder did very well and was actually pretty vocal while in the class. The teachers talked with me after the class since this was their first time meeting Ryder. One of the teachers noticed that Ryder is incredibly visual so she suggested a few ideas for me to use at home with him to help minimize the meltdowns. She suggested using pictures on the fridge at mealtime and Ryder could go and pick out what he would like. This way we don't have to play the guessing game all the time. Of course this may not work 100% of the time, but could be helpful because of how visual he is. The reason she suggested this is because in the class they use a felt board with pictures for the daily schedule and Ryder was amazed by it and really understood it. Once we were done gym time we sat down for music time and Ryder was very antsy so the teacher asked him what was wrong. Ryder got up and took down the gym picture and handed it to the teacher!

Another great thing that occurred today...the boys are napping and fell asleep within 5 minutes of me laying them down! 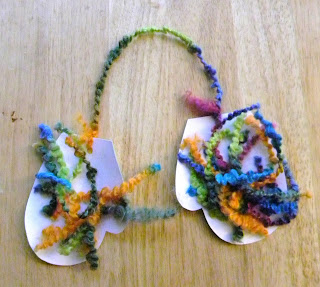 Yesterday our stocking holder arrived! I ordered it from WalMart and it works really well and is very cute. 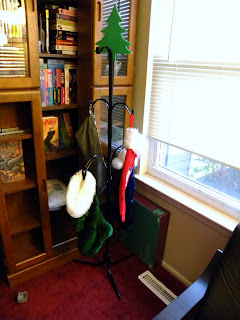 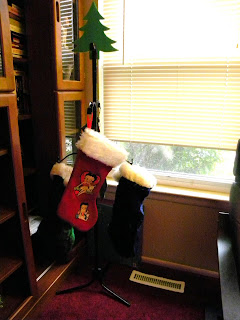 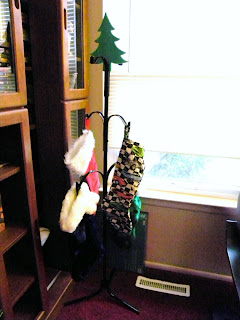 That's great you guys had such a great class, and she gave you some ideas for home!!