Ben's alarm went off at 5am this morning because he needed to leave for work earlier than normal. Well, apparently he was not completely awake when he headed down the stairs. I was still upstairs and heard the loud crash and realized Ben had fallen down the stairs! I admit that I did laugh, but I got up to make sure he was OK. He is still sore tonight from his fall.

Then later in the morning I was playing with the boys in their playroom for a while, but then I had do get some chores done. I left their playroom and put some dishes into the dishwasher, put laundry in the washer, and checked in on Facebook. Then I went back upstairs to the playroom and this is what I found....

**Once again ignore the weird sounds you hear, I can't seem to figure out what happens to the actual sound from the videos. This is taken on my cell phone. The sound works when I put it on Facebook though**

I had to take the easel away from them because they wouldn't stop turning it into a slide. I have to say that I did freak out when I saw them doing this because just the other day an online friend of mine (who has boy/girl twins the same age as the boys) posted that her daughter had broken her collarbone while playing with this exact same easel!

I thought that was the bad thing for the day, but I was very wrong in thinking that. They did eat lunch very well which is a very nice change from our normal day. However, they made it very clear to me that they did not plan to nap. After a few times of reminding them to not jump in bed or pull the blinds down (which they did pull down and break!) I gave in and took them into the playroom. I played with them for a while doing puzzles, building with blocks and playing basketball. I then left the room to go to the bathroom, put some dishes in the dishwasher, and switch laundry from the washer into the dryer. As I was heading down the basement stairs I heard a LOUD crash! I went running back up to the playroom and opened the door.... 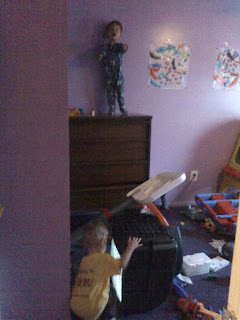 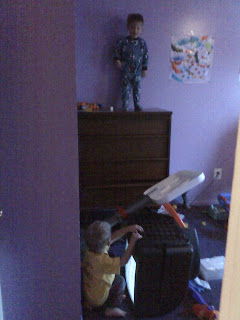 Ryder had figured out a way to climb on top of the dresser and apparently knocked the TV off onto the floor. The TV was still plugged in and attached to the cable wire, but just barely. I unplugged it and unscrewed the cable because they were pulling really hard across the room. After I saw that both boys were safe and unharmed I had to laugh to myself about this. No, it is not funny at all because they could have gotten injured, but if I didn't laugh I would have lost my patience with them! I made sure Ryder knew this was a very bad thing.
A side note...I try to find the good in everything (sometimes this is VERY difficult!)...Ryder was saying "help" when I walked into the room! This means he was initiating speech and asking for something which is very uncommon for him and something we are working on very hard.
A closer look at the TV.... 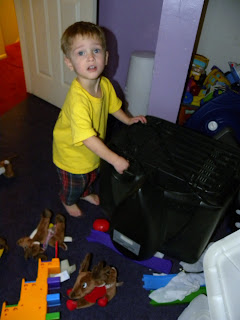 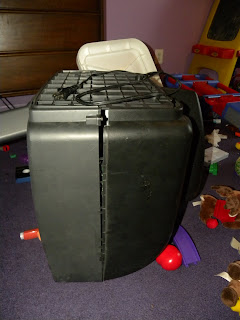 Once Ben got home he looked over the TV and found that it still worked to play movies, but the cable connection did get broken so it no longer works for just playing TV shows.
These boys sure do keep my on my feet all day long! Ben (and several others) keep reminding me they are 2 years old and things happen.
On a good note, we received a box of gifts from Tim & Peg in NH. I opened it up and found a few surprises that were not wrapped, but the rest I left in the box for Christmas Day. I have been working on getting everything wrapped and still have a good amount left to do. For some reason I am just not feeling the holiday spirit this year. I am not sure if it is because we now live an hour away from family and friends so I have not been able to stop in and bake cookies and do other holiday activities, if it is the financial strain we are having, or the fact that this is our first Christmas without Mum Mum. There could be lots of factors playing into this, but I wish I could feel more of the holiday spirit!
We have our Christmas Eve and Christmas Day plans pretty much figured out at this point. Christmas Eve we plan to go and see Tracy and Dave around 2:30pm for a bit before Dave heads to work. Then we will head over to Rich & Laura's for a while. I will leave the boys & Ben there and go to meet Tracy at the 6pm Christmas Eve Mass at OLF. Once that is over I will go back to pick up the boys and head home. Christmas morning we will do our family gifts and open gifts from out of town family. We will then head to Colleen's around lunchtime to hang out for a while. After that we will then go over to my grandparent's house to have dinner and do gifts with them along with my aunt & uncle. And then we will head home to go to bed. It will be a long 2 days, but we will see lots of family and friends.

Oh My what a DAY!!! Sounds like it is quite a journey to have twin boys!! Praying that tomorrow is a little calmer :-)